IS THERE SUCH A THING AS THE GOOD FUNERAL?

Most modern funerals make you feel worse, but my sister’s was different

The sun shone bright and hot. In the branches of a nearby tree fern a tui danced, hopping and flicking as if to supervise the mourners in their work.

Inch by inch we lowered the plain ply coffin into the clayey ground. Words were spoken, petals strewn, tears shed. 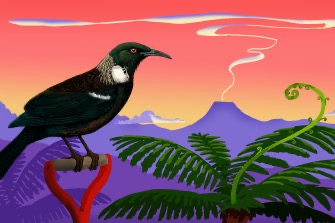 Four women at the grave’s foot sang a spontaneous waiata tangi that seemed to weave itself like vines around the body. Then came the digging.

Removing jackets and shoes several young men formed a loose team, taking turns with the four shovels supplied to heft the dirt back into place. As the earth’s embrace finally closed around their friend and mother, my sister, one of the men sang a passionate farewell – a plea, he later explained, to release her spirit from Cape Reinga.

Funerals are meant to connect us, both to the person we loved and to a sense of spirit. Mostly, they do the opposite. But my sister’s funeral in New Zealand this week makes me suspect there are better, realer ways of doing it.

Most funerals, in my experience, go like this. Still in shock – for, however long the death has taken, it is always a shock – you call the undertaker. The body is removed, embalmed and returned bearing no resemblance whatsoever to your departed.

You’re given an hour, clocked in and clocked out of a crematorium with all the soulfulness of a tanning salon.

Gilded words are mouthed, meant to glorify the departed but – being gilded – they seem only to distance you further from the flawed, funny and f—ed-up person you loved.

Then the curtains open, the coffin is whisked away and you stumble, blinking, back to normalcy. Sometime later you’re presented with a box of ashes and, perhaps, a wedding ring. That’s it. Even if you opt for burial you’ll have a choice, on the whole, between ugly and uglier. Treeless, shadeless, soulless, relentless expanses of bleached-out buffalo grass and asphalt – our cemeteries are no place to spend eternity.

Likewise the ritual itself, which should soothe and uplift, has been shorn of beauty and resonance – becoming now so mundane, so spiritually bereft, as to actually intensify your sense of loss.

And yes, this is the modern conundrum. Having by-and-large rejected organised religion – with its wars and child abuse, its greed and misogyny, its dogmas and rigidities – we yearn for the consolations of history but resist its exploitative demands.

Death is not the only instance. Because virtually all contemporary life purposely fosters our delusions of immortality, we’ve come to regard ourselves as special. Life for Thomas Hobbes might have been ‘‘nasty, brutish and short’’. Not for us. We’re the forever people. For us, then, death is an especially unwelcome reminder.

But maybe that’s the wrong way to see it. Death is terrible, certainly. But, far from making life futile, death gives life its intensity, piquancy and meaning. Death enforces reality – so blanding it over with pretence, plastic flowers and platitudes makes it worse, not better.

My sister’s funeral, heartbreaking as it was, suggests three possible paths to antidote: natural burial, Maoritanga and Guy Fawkes. Curious bedfellows, for sure, but bear with me.

Years ago, I wrote I wanted to be buried in a shroud with an acorn in my mouth. Many pointed out this was ecologically incorrect (the oak being exotic) and, then, illegal. Now it seems only one place in Sydney offers natural burials, but it is at least possible.

My sister refused to be embalmed. Embalming fluid comprises formaldehyde, methanol and glutaraldehyde – all designed to inhibit biodegradation.

So if in the spirit of ‘‘ashes to ashes, dust to dust’’ you wish to rot – rather than worsening greenhouse emissions and using vast amounts of energy (as in cremation) or poisoning soil for years to come (as with normal burials) – you must avoid embalming. You must be dressed in biodegradable clothing and wrapped, ideally, in a fabric shroud or cardboard coffin.

You don’t get a headstone. This is not about permanence or monuments in defiance of death, but about making peace with transience. You get a set of GPS co-ordinates to mark the spot – although in our case the grave sits on a narrow bush path beside a bench, so pretty hard to lose.

Eventually, it will be planted out with bush regeneration but in the meantime, we marked the spot with a Celtic cross my brother made from an old kauri workbench in the house where we all grew up.

My sister was not Maori, except perhaps in spirit, but she had many Maori friends and family. For two full days and nights they kept her body in her house, surrounded by pillows and mattresses, so that those who loved her – and there were many – could spend time, weep, sing and pay respects.

By the time we took her to the hearse, there was a strong sense of shared ownership: this was our body, our funeral, our process, our grief.

We’re not Maori, and we don’t need to be. But we could learn much from other more earth-centred, less denialist cultures, including those that have cultivated Australia for 65,000 years.

By chance, the funeral fell on Guy Fawkes Night. I thanked god all over again that New Zealand still does Guy Fawkes in a real way.

For four short days our favourite Chinese emporium, Wah Lee, sells fabulous rockets and robots, spinners and crackers. Exhausted, drained, we bought a box – as we had when we were children – and lit them for my sister, inhaling jasmine and saltpetre as we watched them soar, spin and explode into the heavens.