Dull, wasteful and overblown – is this the best Australia can do?

I visit the Australian War Memorial in Canberra on a day of high wind and strange portent. The lawns are verdant but the day is dark, angry with topsoil from paddocks where animals graze bare dirt and follow every vehicle with hungry eyes. Similarly, while the war on waste, of all our war arenas, is surely bleeping redder than most, the in-house cafe serves everything with throw-away cutlery and containers. None of it seems accidental. In Canberra everything is symbolic. Now both the anger and the waste remind me how deeply Australia has been shaped by the military mindset.

I’m here to consider Scott Morrison’s newest half-billion-dollar baby; the knock-down rebuild of Anzac Hall, behind the War Memorial museum. Designed by DCM, Anzac Hall is barely 18 years old and bears the nation’s highest architectural honour, the Sir Zelman Cowen Award. If demolished, it will be the only such winner to bite the dust. 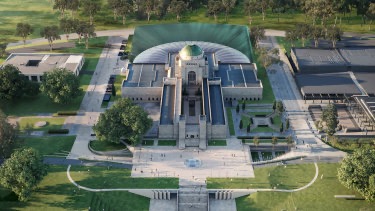 An artist’s impression of the expanded of Australian War Memorial.Credit:Australian Community Media

Which is partly why Morrison’s proposal has generated implacable opposition, with the Institute of Architects running a Hands Off Anzac Hall campaign and publishing an open letter signed by 83 prominent Australians and half a dozen architectural gold medallists.

In city-making, everything has meaning. Even supposedly accidental cities like Sydney, with its dumb devotion to greed and expedience, comprise sedimentary layers of decision. Even Sydney reifies cultural value and belief. But in Canberra it’s more explicit. Here, the tension between the landscape romanticism of Canberra’s design and the hard-headed militarism of its execution is a constant presence.

Canberra centres on an equilateral triangle delineated by Constitution Avenue and the two bridges over the lake. The triangle’s three apices were earmarked by the Griffins, back in 1913, for three symbolic functions: Municipal, National and Market.

Only two eventuated. Civic, or municipal, marks the northern point (where Northbourne Avenue slides between John Sulman’s Sydney and Melbourne buildings that guard Canberra like matching bulldogs). Parliament, or national, occupies the southern point. But the third, eastern point never found its market function. By the time city building began in earnest post-WWII, a sexier “m” function had gained traction: M for military. 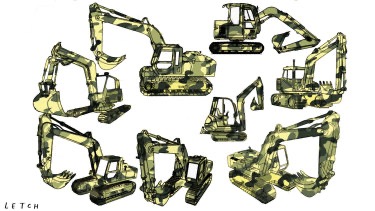 So the third point of the triangle is now occupied by Russell, with the military college of Duntroon nearby and the spot itself marked, with standout aggro-dominance, by the triumphant American eagle. It’s meant to commemorate US beneficence during the Pacific war but reads as a nationwide curtsey to all things American; especially, all wars.

Already, militarism had insinuated itself into Australian culture; by mid-century it was shaping our lives and our cities. Especially Canberra.

As Berlin-based Canberra expert Professor Karl Fischer notes in his definitive history, Canberra: Myths and Models, servicemen received preferential allocations of both jobs and land. By 1918, he writes, “it became estab­lished policy that rural leases would in practice be restricted to returned soldiers” and “access to the public service was to be restricted to those who had been on war service. The Commonwealth was to be a closed shop.” 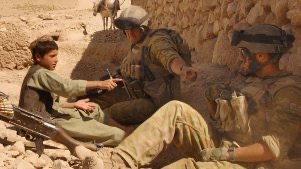 Such practices mobilised a gung-ho mindset that, although no doubt stupendous under fire, is less helpful in city planning. In Sydney, for instance, Major General Sir Ivan Dougherty chaired the secretive but all-powerful Height of Buildings Advisory Committee, driving its two-decade transformation of the old brick-and-sandstone city into a CBD of skyscrapers.

In Canberra, in 1924, these same attitudes gave military engineer Major Sir John Henry Butters inaugural leadership of the Federal Capital Commission. Layering colonial pomposity over the thrumming and symbolically resonant bush capital envisioned by the Griffins, the FCC worked to dilute this tight collection of tram-linked villages with valueless managerialism.

Then, in 1958, the same militaristic attitude made Military Cross-winner Lieutenant Colonel Sir John Overall CBE Commissioner of the National Capital Development Commission which, over 15 years, turned the fledgling capital into a roaring, sprawling, flavourless motorway-dependent smudge.

Back in 1916, though, legendary war correspondent Charles Bean had dreamed of an Australian War Memorial. Bean, who became the energetic curator of the Anzac legend, wrote that such a memorial should “not be colossal in scale but rather a gem of its kind”.

The 1941 building elegantly realised that vision. Designed by the fine immigrant architect Emil Sodersten, its solemnity and discipline embody a profound, unfeigned respect. 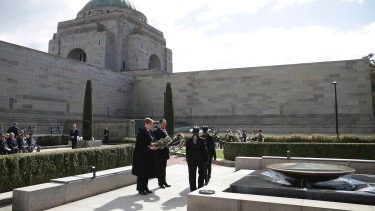 The Australian War Memorial negotiates the delicate line between glorifying war and honouring the dead with grace.Credit:Alex Ellinghausen

Any war memorial must tread the delicate line between honouring the courage and sacrifice of the dead and glorifying war, which is almost always stupid and unjustified. Sodersten negotiates this tension with grace. Although the building-as-object has a New Delhi-style pomposity, the space itself, with its long Pool of Reflection, poppy-lined walls and delicate water-fed flame, envelops you in a sombre poetic.

Fast-forward to now. How to extend this building, and indeed, why? How to commemorate (for example) the Iraq war which has, no doubt, its heroic tales but, implicating us in what was likely a war crime, is one that should never have been fought? And how to justify $500 million when almost every other federal institution, from the archives and the ABC to the CSIRO’s critical climate work, is suffering ruthless cuts?

The AWM proposal has two parts: a huge new underground entrance and interpretation space, designed by Cox Architects, and a still more enormous building of non-specific brief or function replacing and quadrupling Anzac Hall at the back. It’s almost like they’re having trouble inflating the building sufficiently for the half-billion spend.

An interesting precedent is offered by the recently extended Hyde Park memorial, designed by Bruce Dellit (with whom Sodersten had worked) and extended by architect Richard Johnson and artist Fiona Hall.

Like the AWM proposal, it has a major new underground entrance aligned symmetrically and on-axis and lit by an oculus that drops daylight from the world above. But where the Hyde Park Memorial subtly completes Dellit’s vision, knitting it sweetly into the urbanscape, the AWM proposal, at more than 10 times the cost, seems dull, wasteful, overblown and smug.

This is no mere hangar for guns and poppies. This building will represent who we are now, at the intersection of one of the most important songlines in the country (Mt Ainslie to the parliament) with perhaps the most critical moment in history. Can we recreate Bean’s uncolossal gem? Or is dull, wasteful, overblown and smug the best Australia we can find?