My children were threatened and I just wanted them out

So, it’s Advent, the start of Christmas. A single candle is lit. Sydney, though, feels strange, invaded by smoke, brown as billy tea. The air is grey, the sun orange, eyes pink. People wear ventilators in the street and every room smells acrid. Even deep inside the Ros Packer auditorium (watching Martin McDonagh’s ruthless portrayal of rural Irish heartbreak The Beauty Queen of Leenane – by the way, brilliant) you could smell it.

And that’s in the city. In the country, people are covering decks with soil, living in tents in the local showground, queueing for water, watching lives turn to ash. They’re learning to see every tree as a potential fuse and to expect two days a week on high alert for the next four months. They’re wondering if next summer will be even longer, fiercer, scarier. Wondering, should they build underground? 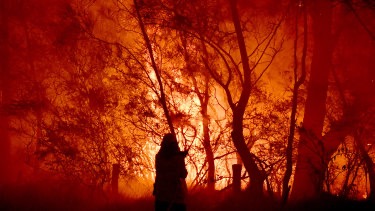 Firefighters fight a bushfire on the south coast earlier this week. Credit:AAP

The Advent candle is meant as a sign of hope, yet it feels as ominous as our smoke-rouged sunlight. “Watch and wait” is the priest’s advice. “To watch and wait is an absolute spiritual necessity.” It sounds serene – except for the eerie echo of the Rural Fire Service’s “watch and act”.

“Watch and act” means heightened alert. Have your plan made. Be ready to decide, too soon to know which makes more sense, leave or stay. This isn’t hope. It’s dread. Welcome to Christmas.

Admittedly, for me, Christmas is always a season of panic and dread. While everyone else seems serenely prepared for the consumption catastrophe I am caught, every year, with nothing planned, prepped or bought, much less wrapped and ribboned. 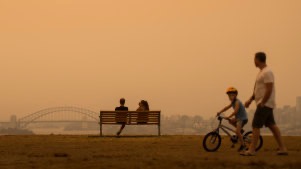 Now that the incipient catastrophe is not semi-pleasurable gluttony but unprecedented fire – now that it is heralded not by a single candle but (according to my eyewitness neighbour) by 60 metre columns of flame – the dread is the same, only worse.

It’s hardly unforeseen. Our family has had a year to prepare for Christmas; 18 months of rural land-ownership to anticipate the fire season; and, let’s be frank, the world has had a century to avert carbon-catastrophe. Talk about slow-learners’ club.

“The furnaces of the world are now burning about 2,000,000,000 tons of coal a year,” the paper noted. “When this is burned … it adds about 7,000,000,000 tons of carbon dioxide to the atmosphere yearly. This tends to make the air a more effective blanket for the Earth and to raise its temperature. The effect may be considerable in a few centuries.”

That was 107 years ago. Yet here we are, caught napping.

It was Black Friday, late November, when the fires became personal for me. There’s a bleak poetry here. For the third year running carbon emissions from fossil fuels have hit a record high. Black Friday was the day carbon-gluttony turned our sky black.

I wasn’t even there. But my kids were, and that’s worse. By evening, the fire front was barely 5 kilometres from the pretty, timbery historic town of Braidwood, perhaps 35 kilometres from our farm. In a high wind, that’s how far embers can travel. Suddenly, it was “watch and act”. Heightened threat level. Action your fire plan.

But what was our fire plan? What did a fire plan even do?

We hadn’t been completely idiotic. As a mild fire-phobe, I’d been careful not to buy even the prettiest land if it were at road’s end, surrounded by bush or absent permanent water. We’d built on a six-inch slab, clad our building in steel, used double glazing, hardwood and steel fly-screens. We’d planted deciduous trees whose sappy trunks and foliage are demonstrably fire-retardant.

But now my children were threatened. That changes things. I just wanted them out. Never mind the buildings, the fences or the beloved hand-watered trees. Leave. Now. Get safe. 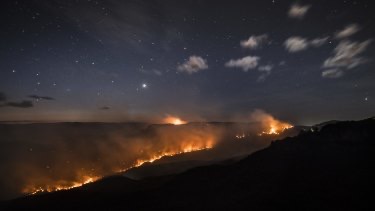 Then, breathing again, I did some research. Some of you will know all this. But many city-types just freak. This is for you – because it turns out the stay option has more going for it than might appear.

You drink a cup of water every few minutes and put drops in your eyes. You trench a hose into the ground. If it comes to that, you wrap yourself in the blanket, which is fire-resistant, and wet a corner of it to breathe through. With such equipment, except on days of catastrophic fire danger, you can stay and fight. Naturally, you should also consult the comprehensive RFS “plan and prepare” documents before deciding to stay put.

Here’s the incentive. Webster quotes a study, following the 1983 Ash Wednesday fires (in which 75 people died and 788 buildings were destroyed), that showed only a third of unattended houses survived, while “the survival rate for houses with three or more people at home was a hundred per cent”. 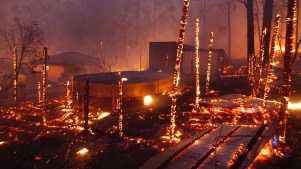 Bush burns fast but, in houses, fire begins slowly. Unless you’re in the direct fire-storm path, ember attack is your biggest enemy. Embers can hit half-an-hour ahead of the fire or up to four hours behind. They can enter via a broken window, under-door gap, loose roof-tile or sub-floor rubbish. But because they smoulder for some time before flaming, they can usually be put out.

Furthermore, “people who abandon such shelter are more likely themselves to be burnt”. So you either leave early, or you make detailed preparation (emotional as well as physical) and stay.

These unprecedented fires, with 2 million hectares already lost and the season barely begun, feel like retribution. Not (as Folau would have you believe) for our validation of same-sex marriage. This is about our abuse of the planet.

It’s like some higher power has finally tired of Australia’s white-bread assumption that we just take the money and stay aloof; that our coal’s smoke damages other, distant eyes, lungs and atmospheres. You think it’s just far-off African countries drying up? Far-off atoll nations biting dust? Think again ‘Straya. There is no Planet B. Watch, you bums, and act.